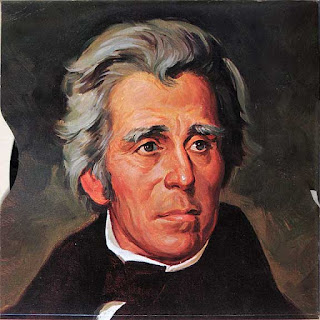 
His origin was humble; and the poorest may learn from his career, that poverty is no insuperable bar to the soarings and triumphs of the free spirit. Nay! Let us rather say, as we remember how the soil of poverty has sent up its harvest of great men, our Franklin, our Adams, our [Patrick] Henry, and our Jackson; let us say, that as in the kingdom of geology the everlasting granite, the underlying basis of all other formulations is found in the deepest gulf, yet ever bursting upward from the abyss, towering aloft into the highest hills, and crowning the very pinnacles of the world; so in the kingdom of man.

Whatever reservations we may have about a rich slaveholder who dispossessed Indians and gave little indication he was actually familiar with the life of the people who so enthusiastically supported him, there can be little doubt that Jackson’s credentials as an self-made man were considered authentic by a majority of yeomen farmers, and he continues to be discussed in such terms to this day.
And yet both Jackson and those supporters seemed to have a perpetually embattled air, as if their legitimacy was constantly in question. Such truculence has long been noted as central to Jackson’s political profile, typically expressed in terms of his opponents arrogating undue power to themselves. “It is to be regretted that the rich and powerful too often bend the acts of government to their selfish purposes,” he said in his famous 1832 speech vetoing the renewal for the charter of the Bank of the United States. “Many of our rich men have not been content with equal protection and equal benefits, but have besought us to make them richer by act of Congress.” The notion that things like banks, roads, and railroad companies were anything but a corrupt scheme was hard Jackson and his most enthusiastic partisans to credit.
In an important sense, however, Jacksonians, especially those in the generation that followed his departure from the White House in 1837, had reason to be aggrieved. A rising tide of industrialism was challenging the farm economy for cultural and political, no less than economic, supremacy. In the years to come, new models of the self-made man would make those of Washington and Jackson no less honorable, but increasingly obsolete.
That’s because an alternative model for the nation’s yeomen was beginning to emerge, one which rejected a core tenet of the self-made ideology that had patched the divide between the yeoman and the planter since the time of Bacon’s Rebellion: chattel slavery. Although only about a quarter of Southern households actually owned slaves in the decades before the Civil War (and most of those only had a handful), even small farmers saw the mere possibility of owning slaves as a basis for hope of upward mobility. But the free soil ideology that emerged in the second third of the nineteenth century increasingly asserted that slavery was actually the problem, not the solution, for farmers who could never achieve independence as long as big planters could effectively outcompete with them in the marketplace on the basis of unfree labor. This argument never gained total acceptance in the South, but was significant enough to furnish an important coalition in the emergence of the Free Soil party in the 1840s and the birth of the Republican Party in the 1850s.
We rightly think of Republicans as the party of Big Business, which they indeed have been for 150 years. But in its early years the party made a special effort to cultivate yeoman farmers, notably in its advocacy of a Homestead bill long blocked by proslavery advocates in Congress until it was finally signed into law early in Abraham Lincoln’s presidency. The Homestead Act was specially crafted with the self-made yeoman in mind. Under its provisions, any farmer who claimed 160 acres from the public domain, paid a small registration fee, and settled on it for five years would own it outright.
The Homestead Act never really lived up to the fondest hopes of its boosters. The law did create hundreds of thousands of new farms, mostly in the upper Midwest, but was sapped by a series of problems, ranging from land speculators who gamed the program to a lack of truly arable land (the law was amended to allow up to 320 acres 1890). In any case, the Republicans had other fish to fry in terms of banks, railroads, factories, and other manifestations of what was truly a new world order.
Farmers, of course, hardly disappeared. Their problems would be central to American politics for decades to come—it would not be until the 1920 census showed there were more people living in towns and cities than on farms. And they would continue to be honored in American politics, society and art, as indeed they are to this day. But the yeoman farmer, increasingly a source of nostalgia along with a careful dissection of his melancholy lot in the work of writers like Hamlin Garland and Willa Cather, lost his hold as the primary manifestation of the self-made man after the presidency of Andrew Jackson.
Interestingly, that title passed to the man he defeated twice, and who would ultimately lose four different presidential elections. It was he who finally introduced the actual phrase “self made man” into national political discourse. He had the evocative name of Henry Clay and it was Clay, far more than Jefferson or Jackson, whose career looked forward rather than back.

Coming soon: a series of posts about the self-made man and the transition from mercantile to industrial capitalism.

The professor as plowman 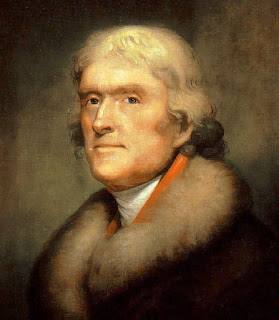 Thomas Jefferson wasn't a self-made farmer. But he played the role -- supportively

The following post is part of a series on the self-made man in American history.