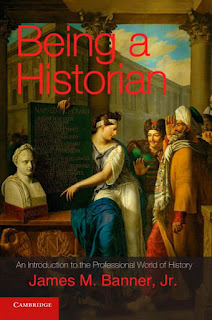 In Being a Historian: An Introduction to the Professional World of History, James M. Banner Jr. tells us what it's like -- or, perhaps more accurately, what it was like

The following review has been posted on the Books page of the History News Network.

In at least some respects, it's hard to imagine a better author for a primer on the historical profession than James Banner. A man who went to college (Yale) in the fifties, graduate school (Columbia) in the sixties, taught at a major university (Princeton) in the seventies, and has played a series of roles outside of academe ever since -- including co-founder of the History News Network, a direct forerunner of HNN (where he currently sits on the advisory board) -- Banner has pretty much seen it all. He is thus able to write with authority on a wide variety of topics of interest to aspiring or working historians, far beyond what he describes as the "academic trinity" of research, teaching, and institutional service.

Though he has enjoyed a series of elite perches in his career, which have circled around elite research universities, the core argument of Being a Historian is a strongly ecumenical one: there are many ways to unselfconsciously claim that identity. Yes: being a historian always involves writing -- but not necessarily monographs, much less books, in an age of blogs, video and other new media. Yes, historians are always teachers -- but not necessarily at colleges, much less classrooms, at a time when "students" of history come in all shapes, sizes, and walks of life. Unfortunately, he notes, far too many people absorb the message that a meaningful career turns around the circumscribed compass of tenured professor. The reasons for that, he explains, are largely historical (and he duly traces the emergence of the profession in the last nineteenth century and its solidification in the first half of the twentieth). But the last few decades in in particular have witnessed a vastly expanded scope and reach for Clio in ways that its practitioners have failed to recognize, much less prepare for.

Perhaps not surprisingly, given his own professional journey, Banner pays a good deal of attention to public history in its manifold forms. The role of national organizations like the American Council of Learned Societies and the National Endowment for the Humanities are described here, as are museums, historical sites, and other institutions with more of a generalist orientation. Banner includes two useful digressions on public intellectuals and expert testimony in his chapter on the subject of history outside the academy, the latter in particular one that has received little attention inside or outside the profession.

Among his more provocative observations are those that note the diminished role for style and voice in contemporary historical writing. "When have we read, as we do in literary and art criticism, of the literary influences on a historian, of the other historians from whom a scholar seems to take inspiration for argument, evidence, and style in addition to ideology and research approach of the shaping of traditions of historical writing and form rather than method or subject?" he asks in a footnote. "Historical knowledge is impoverished to the degree that question must be answered with silence." To put the matter more succinctly: "One often summons great respect for works of history without taking much pleasure in reading them."

All this said, there is an air of the unreal surrounding Becoming a Historian, because Banner seems to understand the principal problems with the profession in terms of misplaced perceptions and overlooked training opportunities, when its real crisis is grounded not in the preparation of scholars or in longstanding arguments about epistemology, but rather its economic foundations. He does take note of longstanding controversies like unionization efforts among graduate students or the growing -- even dominant -- role of adjuncts in most history departments. At one point he describes the reduction of institutional reliance on part-time faculty as "an effort broadly under way," which seems out of touch, because there is little discernible success in this regard among historians or anyone else in higher education.

Banner seems to conceive becoming a Historian in terms of talented and ambitious people assessing it as a possible career in the way they might finance or health care.  (Until recently, one might have said medicine or law, but these two fields are undergoing the kind of upheaval aspiring professionals might have hoped avoid -- upheaval of the kind workers in other sectors of the global economy have taken for granted for a generation.) Instead, a decision to embark on a career as a historian today is a little closer to that of deciding to become an actor, musician or professional athlete, an ambition likely to instill concern if not terror in a parent's heart. As even the most insulated senior scholar now says as a virtual incantation: "There are no jobs."

Of course, this is not literally true. Baby Boomers are leaving the profession all the time, and someone will get that tenure-track job -- for a while longer, anyway. And yes, there's probably more of a demand than ever for certain kinds of public history professionals, albeit on a much shakier pecuniary basis. Amid the growing power and appeal of foreign universities (which will increasingly retain their own students), the proliferation of alternative online learning opportunities (whose existential threat to smaller liberal arts colleges is quickening), and the shrinking government role in financing research and subsidizing tuition (which is forcing schools to refocus their priorities, a.k.a. reduce their program), change is coming to the historical profession -- academic or civic, public or private -- whether scholars want to acknowledge it or not.

To invoke a distinction Banner is careful to cultivate at the outset of this book: history will survive as discipline, as it has for thousands of years. But as a profession? That's a lot less clear. A more likely scenario would seem to involve history as a disposition or focus for an individual teacher in a larger humanities field, which has shrunk as a locus of student interest amid well-founded anxieties about finding well-paying job (never history's strong suit in any iteration). I happen to chair the history department of a private high school where roughly half of the teachers I supervise hold doctorates, most, though not all, refugees from the university world. But if I have my way, our department will be evolving in a significantly interdisciplinary direction in which history will become one color on a palette from which students will practice the arts of reading, writing and thinking. I'll always consider myself a historian, even though my own doctorate is in American Studies. But that's a matter of personal loyalty, not livelihood.

James Banner is an ideal figure to tell us what is has meant to become a historian. His remarks surely have relevance for at least some current graduate students. But for what it will mean to become a historian: that volume has yet to be written. When it is, I suspect the book -- or, perhaps more accurately, "book" -- will look, sound, and feel substantially different than this one does.


On the eve of the Academy Awards, CNN.com has run my profile of Daniel-Day Lewis's career, with a focus on his recent role as as Abraham Lincoln. The piece draws on my analysis of of his work in my new book Sensing the Past. Read all about it here.
Posted by Jim Cullen at Sunday, February 24, 2013

The main themes of my book Sensing the Past: Hollywood Stars and Historical Visions are discussed in a piece that has appeared online and will be part of the the Sunday "Outlook" opinion section of the Washington Post this weekend. I feel very fortunate to have my work appear in this august publication.
Posted by Jim Cullen at Saturday, February 23, 2013