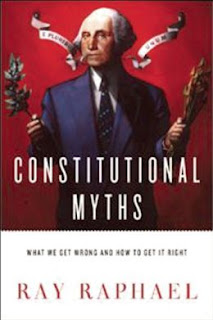 In Constitutional Myths: What Wet Get Wrong and How to Get It Right, Ray Raphael hollows hallowed Conservative doctrine

The following review has been posted on the Books page of the History News Network.

Once upon a time, the Constitution was seen by historians as the property of the right. That's because Charles Beard told us so -- exactly one century ago. In his influential 1913 book An Economic Theory of the Constitution of the United States, Beard explained the document was the work of a wealthy elite seeking to restrain the egalitarian tendencies of the American Revolution. But Beard provoked a reaction; by midcentury a new generation of scholars like Clinton Rossiter of the Consensus School argued for a less ideological approach to understanding the framing and approval of the Constitution. The rise of neoconservatism in the last half of the twentieth century, typified by organizations like the Federalist Society, effectively lionized precisely what Beard complained about. Diffused versions of such thought drifted into the Tea Party, where the Tenth Amendment, which emphasizes the limits of what the national government can do, has become sacred scripture.

Now here comes Ray Raphael to take the Constitution back for the left. Actually, Raphael has been contesting conservative interpretations of American history for some time. His 2001 book A People's History of the American Revolution, part of a series under the editorship of the late Howard Zinn, renders a bottom-up version of the story in the now-classic Zinn traditon. Founding Myths: Stories that Hide Our Patriotic Past (2004), is a collection of counter-narratives that challenge heroic tales that disempower ordinary Americans by emphasizing the gap between the Founding Fathers and themselves. Such concerns are rooted in Raphael's own personal history; he was a participant in the Civil Rights movement a half-century ago as a community organizer and voting rights activist.

Loosely speaking, Constitutional Myths is a sequel to Founding Myths, in that its locus is about a decade later and is similarly devoted to contesting prevailing conservative notions. But while the former focused on people and anecdotes that had become literally legendary (e.g. Paul Revere's ride, Molly Pitcher's battlefield prowess, etc.), his concerns this time are more purely ideological. A series of eight chapters systematically dismantles notions that the framers of the Constitution were anti-government, anti-taxes, or even anti-politics. In each case, he begins by conceding the "kernel of truth" to such views, before a "but" section outlining the alternate view and a longer "full story" that suggests the complexities and ambiguities involved. Still, Raphael's own views are clear. Of course the framers believed in a strong central government; "if all they cared about was restraining power they would have stuck with the Articles of Confederation." James Madison was not the father of the Constitution; if he was the government would have actually been a good deal more centralized than it was (that's because conservatives tend to focus on the Madison of the 1790s who hated Alexander Hamilton rather than the Madison who worked alongside him in the 1780s). Instead of an emphatic assertion of limited government, the Bill of Rights was actually a piece of political legerdemain designed to forestall a second Constitutional Convention that might have fatally weakened federal power.

Raphael writes with a deft touch and a lifetime of learning that he wears lightly. His immersion in the primary sources is as evident as it is for less pointed peers like Pauline Maier and Jack Rakove (who provide blurbs for the book). One feels to compelled to challenge his assertion that one can tell anything resembling "the full story" from any perspective in chapters that average about 20 pages. And as Raphael himself would probably concede, it would be possible to construct an alternative version that turns his assertions inside out with chapters that concede federal power but emphasize its limits, a Madison who may not have authored the Constitution but provided plenty of its DNA, and so forth. But this is very much a history and for its moment -- originalists be damned.

Again, what keeps it grounded is Raphael's evident authority. Constitutional Myths is buttressed with a substantial collection of primary source documents that form a counterpoint to the standard issue sources students typically encounter. Indeed, the book makes for an ideal text for a high school or college civics course, one that revitalizes an old-fashioned but necessary subject.  Raphael's youthful vitality makes him a welcome traveling companion for beginner and seasoned veteran alike. Long may he wave.
Posted by Jim Cullen at Friday, March 08, 2013