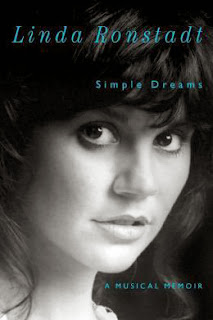 Linda Ronstadt's Simple Dreams: A Musical Memoir has too many silent notes

When I was a kid in the 1970s, I always kinda liked Linda Ronstadt, even though she was a "mere" pop singer rather than a "serious" rock artist known for pop ballads like "You're No Good" and "Blue Bayou." By the 1980s, I had come to appreciate the sheer power of Ronstadt's voice, which she fused with a wonderful sense of theater and an impeccable sense of taste in her choice of material, which seemed to range across every idiom of American popular song. In the decades since, that appreciation for her work has only grown. My genuine affection for pop ingenues from Alanis Morrisette to Taylor Swift -- and respect for their songwriting talents -- notwithstanding, the sheer beauty of Ronstadt's voice is one I turn to again and again in the solitude of my car, about the only time I can seem to carve out for music in my middle-aged ears.

It was with a sense of deep disappointment, then, that I read Ronstadt's new published Simple Dreams: A Musical Memoir. Ronstadt does worse than simply give the years of her best-known work short shrift: she actively dismisses them. "I never felt that rock and roll defined me," she explains at one point in one of the rare moments she really engages with the key phase of her career in the latter half of the 1970s. "There was an unyielding attitude that came with the music that involved being confrontational, dismissive, and aggressive -- or as my mother would say, ungracious." It's not that Ronstadt is wrong in such an assessment, necessarily, or that she didn't produce work of considerable value in her recordings with the legendary arranger Nelson Riddle in albums like What's New (1983) or her wonderful collaborations with Emmylou Harris and Dolly Parton like Trio (1987). But really: does this sum up her feelings about Chuck Berry, whose version of "Back in the USA" was the cornerstone of Ronstadt's 1978 album of the same name, which prompted her friend, New York Times critic John Rockwell, to pen a classic essay for the Greil Marcus collection Stranded: Rock & Roll for a Desert Island (1982)? About Buddy Holly and her version of "That'll Be the Day"? Warren Zevon's "Poor Poor Pitiful Me" (and her more obscure, but magnificent, rendition of "Mohammed's Radio")? Ronstadt gives a chapter to her work with New York theater impresario Joseph Papp. Fair enough. But is there nothing to be said of the making of Simple Dreams and the exceptional crew of session musicians like Waddy Wachtel and Russ Kunkel who enlivened her most commercially successful work?

It's not that Rondstadt has no stories to tell. We get some fine sketches of the leading figures form the Los Angeles rock scene of the early seventies like Jackson Browne and members of the Eagles (who at one point were her backup band). We also get unexpected glimpses of less predictable personalities like Keith Richards (Ronstadt tells a funny story about getting stranded as the only sober person at a west-coast mansion with no one to take her home). And she shows real gifts as a writer. She describes the 64 year-old Atlantic Records founder Jerry Wexler -- another surprise cameo -- as speaking like "a Jewish bopper with a Jesuit education."

But she simply holds too much back. I wasn't seeking or expecting a tell-all autobiography. But really: can she reveal nothing about how she crossed paths, and began a romance with, California governor Jerry Brown? New York journalist Pete Hamill? We hear more about Ronstadt's relationship with her childhood horse than we do these people. Actually, the evocation of her Tucson youth -- in effect, the reassertion of her Latina identity -- is skillful and welcome. But as it became increasingly clear just how much Ronstadt was going to withhold, I couldn't help but a feeling growing resentment. In one sense, she of course is under no obligation to tell me anything. But when she literally makes it her business to sell her life story, I would have liked to see a more active and generous attempt to calibrate what she would choose to relate.

After finishing this book, I went to Amazon.com and bought a recent compilation of Ronstadt recordings from 1975-80. I probably should have done instead of reading this book. No hard feelings, Ms. Ronstadt. I would be worse than a fool to let this episode in our relationship linger. Thanks for the memories, even if they don't mean as much to you as they do to me.
Posted by Jim Cullen at Sunday, November 03, 2013