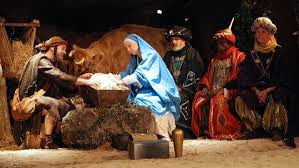 This is an archive edition of AHN that first appeared in 2010. The second half of my Milton lecture will appear next week. Best wishes to all for a happily restful holiday week and a productive 2014.

Jim is observing Christmas. Not "the holidays," not "the season," but Christmas. On balance, the United States is probably still statistically a Christian nation, but its elite is largely secular, and that which isn't is religiously diverse.

Insofar as Christmas really is a minority observance among the people whose eyes may cross this blog, I don't regard that as a problem. Notwithstanding complaints on the part of some, there is no "war" on Christmas. There are plenty of reasons to be skeptical, if not hostile, to Christianity in general and Roman Catholicism (which I practice) in particular. But I don't think you have to be religious or Christian to find hope and cheer in a scenario of a poor child in a remote place coming into the world and transforming it by the power of word and example.   And that a few wise men would sense something afoot and seek out the child (as well as a powerful satrap who would be thwarted in the attempt to find and kill a future rival). As would become clear over time, that child was never meant to be a secular king. His work, and his legacy, would prove more durable.

The following is the second segment of my 2013 Heyburn Lecture, delivered this month at Milton Academy in Milton, Massachusetts. The first segment is below; subsequent posts will follow.


To a great extent, the gains procured by the Civil Rights movement and other struggles that followed in its wake reflected the persistence, ingenuity, and morality of those who sought to secure and expand social justice.  But they also reflected a calculation on the part of people in power that they could afford to accommodate such expansions, a calculation rooted in the dividends paid by victory in the Second World War. This did not necessarily mean such people were enlightened. Nor did it mean that the nation was inexorably evolving in the direction of Progress, though the economic logic of the time suggested that calls for redistribution of wealth could be resolved by making the proverbial pie bigger, not cutting it differently. The margins were somehow wider, the possibilities greater, even if there were limits, as there always are, as to how much those in positions of entrenched privilege are been willing to concede to those who challenge them.
Next: The end of Post WWII Victory culture and what it means for you.
Posted by Jim Cullen at Thursday, December 19, 2013 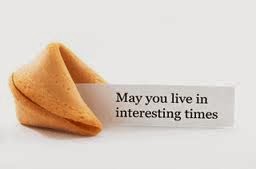 The following is the first segment of my 2013 Heyburn Lecture, delivered this month at Milton Academy in Milton, Massachusetts. Subsequent posts will follow.

Okay. So here’s my opening statement: You have not lived in interesting times. Neither have your parents. Nor your grandparents.
Perhaps this strikes you as a strange, if not ridiculous or pointless, assertion. You may be willing to concede that not all that much has happened in your short, twenty-first century, lives. You had pretty much just arrived, and barely remember, September 11, 2001, a truly terrible day in our national history – and “terrible,” whatever else it may be, certainly qualifies as “interesting.” Maybe you’d point to what seems to have been a fairly rapid social change in law and attitude regarding gay marriage. Or wars in Iraq or Afghanistan – these were big, long conflicts that have affected the lives of lots of people.
But even if you would concede you have not come of age in interesting times, you’re less likely to concede the point on behalf of your elders: they have had some interesting times. The creation of the Internet. Feminism. The Civil Rights Movement. Surely these events count as interesting. The mere fact that you, who will avow that you really don’t know all that much, have at some point been told about such things suggests that they count for something. And even if they did not, you could point to a relative who had a struggle or triumph that would qualify as “interesting” in more than a narrow way, because such a personal drama – financial setbacks, discrimination, entrepreneurial success, whatever – took place against some larger historical backdrop.
I take the point. I don’t mean to diminish the significance of these events at a personal level, any more than I want to diminish my own lived experience or that of my own parents and children. It’s not that such things don’t matter; they matter a great deal, not only on an individual level but also as emblems of the American experience more generally. That poor treatment your grandmother suffered as part of the larger saga of exclusion or inequality in our national life; that business your dad started as a little piece of the American Dream: they’re reflections of a shared national experience. But again, the fact that such stories unfolded in the last 75 years means that they haven’t happened in interesting times.
Maybe by now you’re zeroing in on “interesting”: what’s that supposed to mean? Maybe you’ve heard the reputedly ancient Chinese curse: “May you live in interesting times.” In that understated way we westerners sometimes associate with Asians, we grasp the irony that “interesting” is actually a euphemism for “chaotic,” or “dangerous,” or just plain “horrible.” Ironically, there’s little evidence that the aphorism is widely known among the Chinese; the clearest recent documentation of the phrase that I’ve found comes from the correspondence of a British diplomat in China in the 1930s. Reeling from decades of colonial exploitation, ripped apart by civil war, overrun by foreign invaders: times simply don’t get much more “interesting” than they were in China during the thirties. Even the greatest, most stable civilizations are subject to moments of great upheaval, and China has had several in its storied history. But this was surely among the worst. There aren’t many people alive in China who lived through those days, but the collective memory of such events are what make the nation’s revival a source of shared pride.


By comparison, there haven’t been all that many “interesting” times in American history. The earliest days of colonial history certainly qualify in terms of danger, brutality, and uncertainty. So does the American Revolution. And the Civil War. As do any number of serious economic downturns before the calamity of the Great Depression in the 1930s. All through and between these periods, there were groups of people who subjected to systematic suffering: their times never ceased to be anything but interesting. Yet their stories, real and rich as they are, were woven into the fabric of nation’s master narrative only recently. They have not been deemed interesting in the more conventional sense of the term: commanding the attention of others to the point of being documented and recollected. History is in some sense the conversation between a shifting cast of characters who are understood to constitute a people at any given time. Part of which involves the discovery or recovery of that which was perceived as lost.
Next: The last interesting time: World War II.
Posted by Jim Cullen at Monday, December 16, 2013 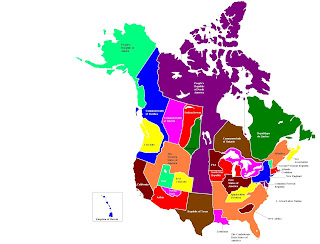 This is final installment of a series of posts about the role of regionalism in U.S. history.