First of the 'Mohicans' 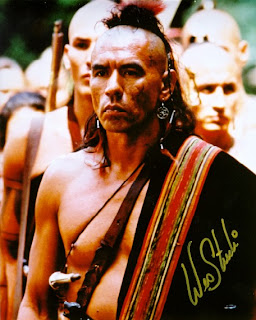 This post is part of ongoing series about, or related to, the films of Daniel Day-Lewis, part of a work-in-progress.

There are a lot of reasons I can think of to like Michael Mann's 1992 version of the James Fenimore Cooper novel Last of the Mohicans. (I plan to watch the 1920, 1936, 1947, and a couple other versions shortly.) Among them: the vast improvements to the novel (from plot to dialogue); the quality of the acting (Daniel Day-Lewis, of course, but also an exceptionally fine cast whose most shining star may be Wes Studi's portrayal of the villain, Magua); the extraordinarily vivid locations (set in Appalachian colonial New York, it was shot in 20th-century North Carolina); and the scrupulous attention to period detail. One other great feature: the soundtrack, which blends native drums with Scottish reels to tremendous effect. There's not better music for driving on an autumnal day.

But what I've been thinking about lately is an aspect to the movie that derives from the source material but which comes across with great impact here, and that is a tremendous sense of historical possibility. Mohicans is set on the New York frontier in 1757, one of the truly contingent turning points in American history. The French and Indian War, a world war that stretched from from the colonies to India, had been underway for three years, thanks to the callowness of a Virginia errand boy named George Washington, who didn't realize that the Indian guides who he thought were helping him inform a French detachment that they were trespassing instead killed those soldiers for their own reasons. 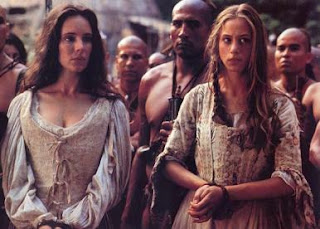 The early years of the war went  badly for the British empire, as French forces under the great Louis-Joseph de Montcalm drove down that great American highway known as the Hudson River and captured a strong of British checkpoints, among them Fort William Henry (epicenter of the plot of the movie). The five nations of the Iroquois were allied with the British; Huron peoples, among them the Ottawa, were allied with the French. The startling complexity this multicultural conflict comes into sharp focus during the sequence illustrated above, in which a Huron sachem speaks French to a captured British soldier, who then translates his words into English for the British-born but adoptive Mohican played by Day-Lewis, who bargains for the lives of two sisters by offering a wampum belt of his people. To gain the right do so, he had to endure the ritual abuse in entering the Huron village, part of a shared understanding of due process that bound sworn enemies.

Everything was up for grabs in 1757. Outnumbered demographically, the French nevertheless had the upper hand militarily, and a French victory -- complete or partial, negotiated at the bargaining table or achieved force of arms -- was by no means an implausible outcome. The permutations among Native Americans were even more dizzying. By this point, they had been parrying Europeans for a 150 years, and while the threat of a decisive victory by either side endangered their ability to play the white powers against each other, any number of outcomes could strengthen a particular people or specific figures within a people. As for the colonials, well, Cooper and his successors gave signs that these natives were growing restless with British rule too. But any imagined revolution would be impossible to seriously contemplate as long as there were French and/or Indians positioned in their rear.

With a couple years, a dramatic reversal of fortune that would culminate on the Plains of Abraham outside Quebec would, in effect, decide the fate of the North American continent. The set of arrangements that followed were certainly not inevitable, and a big part of what I understand the job of a historian to be is to recapture the sense of strangeness, of contingency, in our contemporary lives. But that's hard to do, in large measure because the sheer vastness of the world in Last of the Mohicans seems irretrievably lost. Our horizons, seem so much smaller, and dimmer. Where we once looked west with hope, we now look east with fear.