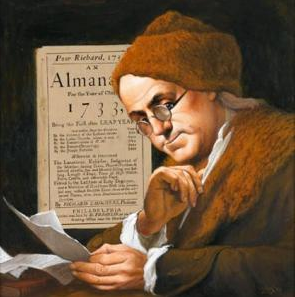 The following is part of a series of posts on the rise and fall of the self-made man in American history.

In June of 1757, the fifty one year-old Benjamin Franklin crossed the Atlantic Ocean for the second time in his life to begin a new career as a lobbyist representing the colony of Pennsylvania (as well as New Jersey, Georgia and Massachusetts) in London. Before leaving America, the retired printer wrote a valedictory essay, “The Way to Wealth.” Franklin had himself won wealth as a publisher of almanacs, a commonly produced publication in colonial America, appealing to printers because they were cheap, timely, and popular. Because he writes with such disarming simplicity, it’s worth quoting his autobiography on his experience in the business:

In 1732 I first published my Almanack, under the name of Richard Saunders; it was continued by me about twenty-five years, commonly called "Poor Richard's Almanac." I endeavored to make it both entertaining and useful, and it accordingly came to be in such demand that I reaped considerable profit from it, vending annually near ten thousand. And observing that it was generally read, scarce any neighborhood in the province being without it, I considered it as a proper vehicle for conveying instruction among the common people, who brought scarcely any other books. I therefore filled all the little spaces that occurred between the remarkable days in the calendar with proverbial sentences, chiefly such as inculcated industry and frugality as the means of procuring wealth and thereby securing virtue; it being more difficult for a man in want to act always honestly as, to use here one of those proverbs, it is hard for an empty sack to stand upright.

Next: Franklin as city boy
Posted by Jim Cullen at Wednesday, November 14, 2012